"When I brought it up, my father gave me an ultimatum. He told me to stop or f*ck off. That was the wake-up call for me," Jack, who is very close to his parents, explains.

Jack hails from Perth in Australia. During a construction boom in his student years, there was a demand for work. He was basically already working full time in the industry while working on a degree in construction management and economics. The money was good and living at home meant he had more disposable income than most of his peers.

He started frequenting nightclubs. With a self-professed addictive personality, Jack says it was these nights out that quickly became a slippery slope to his drug addiction.

Luckily he comes from a close-knit family. His parents and brother knew something was off and the confrontation ensued. Jack decided to go cold-turkey. He struggled to find balance coming off the drugs, which led to depression and other mental health issues. He worked with a psychiatrist and joined a program while cycling became his regular therapy. Unfulfilled at work, Jack would spend every free moment at work reading up on cycling and watching videos.

He decided to add more riding miles than dreaming miles. He took leave at work to participate in the Transcontinental Race, a self-supported ultra-cycling race across Europe. Upon returning to Australia, he promptly quit his job to pursue his cycling passion, not knowing how he would earn a living.

The adventures got more extensive. In 2017, he completed 50 000 kilometers (31068.56 miles). He started documenting his experiences for magazines and realized that he was giving brands exposure upon being published. Naturally, he started receiving sponsorship support and Jack UltraCyclist was born.

Jack rides an average of 30 hours a week. Based in Girona, some of his achievements include a Guinness World Record for the Most Kilometers Ridden in 7 Days – 3505km. Last year he did what he branded “The Amazing Chase”, completing all 21 stages of the Tour de France in 10 days. That was 3,500km and 52 000m elevation gain. Even today, he says he still pinches himself when he thinks about the fact he rides his bike for a living.

Jack UltraCyclist is in the midst of his biggest challenge yet. This year he has committed to riding one million meters elevation (621 miles) while trying to raise one million Euros for charity. He's doing this by ‘Everesting’ once a week for the entire year. If you've not heard of the cycling craze yet, Everesting is where you find a hill and climb 8848 meters in a single ride.

Jack embodies what it means to be Supersapiens. We’re proud of his journey. We’re excited by the progress he’s making. We’re honored to call him a friend.

"The bike provided the light at the end of the tunnel and gave me this escape in my mind. It's always been on my mind to create awareness for mental health through all the adventures I have on the bike, but this year, more than awareness, I thought I'd raise funds to help people," Jack said.

He has completed every Everesting so far this year. Some were tougher than others. A few weeks ago, he received some difficult personal news from back home on a Monday and then had to complete his 16th Everesting the next day. "Mentally, I was not in a good place for that one. It rained all day and I questioned all my life choices. It was a nice one to tick off and complete because I persevered. The sense of achievement when I saw the 8848m at the end of that ride was incredible."

Fueling for the mountain

We asked Jack about his nutrition for these expeditions and the role Supersapiens plays.

My dad has type 1 diabetes, so I was interested in getting involved with Supersapiens. Growing up, he was constantly fiddling with his glucose levels and could see the effects of being high and low. Now I get to put that into my cycling – it's fantastic.

The biggest thing was when the energy band came out and I could regularly check my glucose because the band fits on my aero handlebars. I look at it more than heart rate, power, or speed; it's a constant metric. I can work out exactly when I need to fuel. I've worked out an excellent strategy for how much I need to eat and when. It's been a game-changer for me.

Before Supersapiens, I was aware of how much to eat because I'd work with nutritionists and they'd say I had to eat 90 grams of carbohydrates an hour. But I didn't have the visibility to know if that was enough and what kind of foods were giving me rushes in my glucose. To see the live result feels like the new frontier. 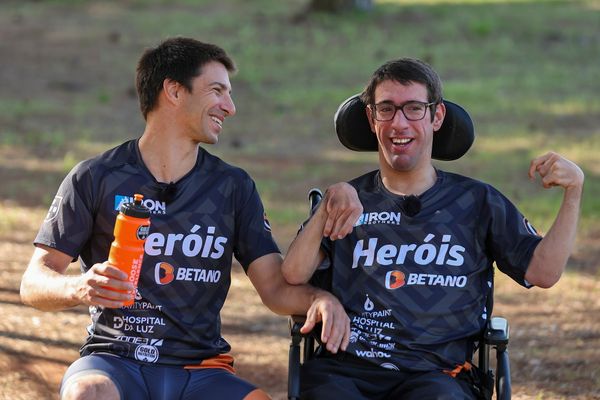 “We experimented until we got the perfect strategy... it’s amazing what we’ve accomplished with the sensors.”

Ever lose focus during an important situation and can’t figure out why? Maybe in a meeting at work. Or maybe it’s trying to read a putt on the