Pedro has met the Pope three times. On one occasion, he was invited to a private meeting with only 20 guests. His family thought he would ask the Pope if God could make his body stronger so he can walk. Instead, he asked the Pope if he could celebrate his sister’s upcoming wedding.

His brother, Miguel, says that’s exactly who Pedro is–always thinking of others. Pedro lives with Cerebral palsy. Partnering with Miguel, the two brothers from Portugal race IRONMAN triathlons and marathons to advocate for people with disabilities.

Pedro attends a special school for people with disabilities. Though his family is able to support his condition, he noticed others at his school weren’t as fortunate. Not only that, but the school is well underfunded and still transports the kids in vehicles from the 1960's with no heating or A/C, which is probably much worse than what he describes as "uncomfortable in winter and warm in the summer."

Not one to complain, Pedro was in search of solutions. He challenged his brother Miguel to race an IRONMAN to raise money for the school. One month ago they managed to get a brand new truck donated to the school.

In the first part of the year, the brothers focus on training and racing while the second half of the year is dedicated to social work.

For the swim, Miguel pulls Pedro in an inflatable canoe. Not only do they show what's possible, but they also donate similar canoes to those with disabilities so more people can join open water swims and inspire their community.

For the bike leg, Pedro straps into a chair connected to Miguel’s bike. They’ve been able to provide similar chairs to other athletes who want to get out and race like them.

Two years apart in age, the brothers have a special connection which gets them through the arduous challenge of endurance racing. Miguel says he can always hear Pedro under the water as he cheers him on during the swim. Energy is usually high getting out of the water, but the bike is the most demanding and the risk of missing the time cutoff is at its highest.

“The bike is where the most drag is generated,” says Miguel. “When there is wind, it’s like having a parachute on your back. We have to push almost 400 watts on a 4% climb. I have to keep pushing 200 watts on every part of the course and can’t afford to slow the speed down because of the cut off.”

When the going gets tough, Pedro knows exactly what Miguel needs. He takes his mind off the stress and pain with memories of family vacations to Mexico.

“Pedro is very clever in helping me when I’m in pain in the race. In the last IRONMAN it was 35 degrees Celsius (95 Fahrenheit) and I was bonking. He started saying, ‘ok we may not finish but just give me 5 kilometers more.' After that he told me ‘let's just bike until we reach our family.’ Suddenly we did the 20km left to finish the bike and we made the cutoff!”

What makes their achievement of finishing an IRONMAN within the time cutoff more impressive is that Pedro is unable to eat by himself. Miguel takes between 15-20 minutes at each aid station to fuel both Pedro and himself.

“Pedro eats every 1 hour to 1:30 since his effort isn’t as fuel dependent as mine. On the bike we get away with two and a half hours of feeding and he drinks every hour. If it’s too hot we will switch out water for an isotonic drink so he gets some salts. He really loves sandwiches with Portuguese ham and he eats that with sports gummies,” says Miguel.

Fueling has been a constant learning curve. Miguel says his biggest takeaway since using Supersapiens has been increasing fueling during training and for recovery between workouts.

“We were experimenting with something different until we got the perfect strategy for us. Instead of taking one big gel far apart, I eat more frequently now. After four months of iterating our nutrition in training with our nutritionists, it’s amazing what we’ve accomplished with having visibility with the sensors.”

This past weekend, the brothers raced IRONMAN Hamburg.

I don’t have words to describe the day we experienced. It was amazing. I suffered a lot on the bike. It was much more windy than forecasted and we had to fight a lot, especially in the last 20 kilometers. I started calculating the time and I noticed we were four minutes behind the cutoff so I gave everything I had to finish the bike. And we did it. We gained 6 minutes and had a two minute margin for the cutoff when we got to transition. The swim was ok, but it was energizing to pass about 300 athletes because we started last. We didn’t swim faster as there were several not-so-good swimmers around and we didn’t want to scare them with the boat. We were in the glucose performance zone most of the race. I think I dropped a bit towards the end of the bike because I had to choose between eating and giving all I had to make the cut off, so I was focused on pushing watts and forgot to fuel. The run was well fueled though, and I knew exactly when to eat. The Energy Band was precious during the race to help me maintain my fuel levels and glucose stability. It truly was a memorable day.

Do you scan over or under: Over
How do you take your coffee: Black, plain without sugar. I am addicted to coffee. I drink American coffee.
What’s your highest glucose score: 98
What’s your lowest glucose score: 28
What’s your favorite priming meal: A big bowl of oats with peanut butter
Favorite post-race meal: Sushi. I dream of steaks and sushi during races.
What day is sensor day: I just change when it says it’s ending. I don’t have a regular day! 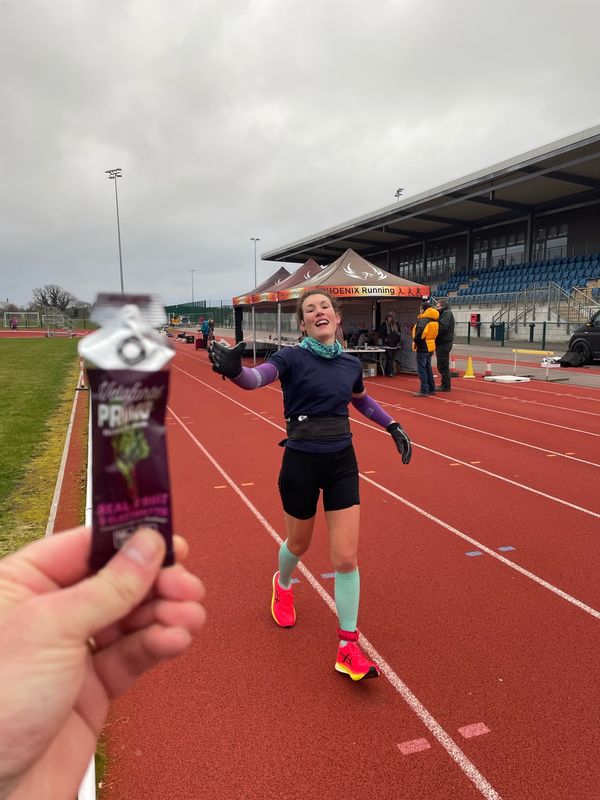 How can you optimize your nutrition strategy to go faster, longer? The straightforward truth: Avoid drops in your glucose levels. How do you actually avoid those drops? There are 5 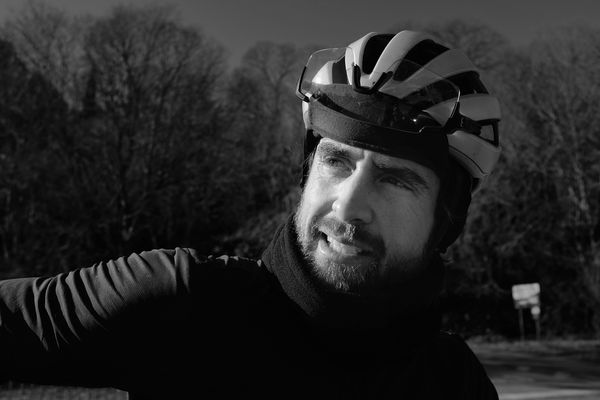