Fact: Walking is great for your health in general. The physical activity, blood flow, stress reduction can’t be beat. But did you know about the glucose related benefits? Smoother glucose comes from walking, which you feel energy-wise, and can help reduce the hunger pangs associated with big swings in glucose.

Walking after a meal is a great way to help limit glucose rushes. It’s also one of the many strategies that can be used to drive glucose stability—which plays a role in how we feel throughout the day.

Before we dive into why post-meal walking can flip potentially harmful glucose rushes into sustainable glucose rises, let’s first discuss how glucose is absorbed and used in your body.

What Happens To Carbohydrates After You Eat Them?

After eating – and assuming we are eating carbohydrates here – the food gets broken down in the gut and then glucose is released into the bloodstream.

From there, the glucose travels via the bloodtreams so it can be used by the body as a fuel source. Different organs and tissues require varying amounts of glucose, so we have different glucose transporters for the different tissue types. These are known as GLUT’s (short for GLUcose Transporters). Each GLUT has a corresponding number to identify where it works. For example, GLUT-3 is in your brain’s neurons. GLUT-4 works in your muscles.

These GLUT’s sit within cells and need to be translocated – moved from the inside of the cells to the surface of the cell. When translocated, they become active and able to transport glucose into the cells.

So How Does The Body Use Glucose?

Multiple factors can trigger translocation so the GLUTs can get to work moving glucose into the cells.

Insulin is the primary trigger to translocate GLUTs. Insulin’s primary role is to regulate high glucose levels by putting your blood’s glucose into storage. Insulin is a hormone released in response to eating carbohydrates that allows your body to take glucose from the bloodstream and put it into tissues (in the form of glycogen, or the storage form of glucose) to be used later. Additionally, glucose reduces glucose output from the liver. Just another way that it can reduce glucose levels.

(To learn more about the body’s metabolic state and the relationship between glucose, insulin, and glycogen, check out this article.)

Besides Insulin, What Else Stimulates Translocation of Glucose Transporters?

The most notable stimulus for GLUT translocation is what is known as ‘contraction mediated GLUT-4 translocation’. This is, as the name suggests, when muscle contraction causes GLUT-4 translocation. Knowing GLUT-4s are in muscle cells, this both makes intrinsic sense – because muscles need glucose when contracting – and explains why post-meal walking is effective in blunting increases in glucose levels, because your body immediately uses or stores the glucose.

So, let’s ask a different question: What happens if you don’t walk after a meal?

When glucose isn’t needed by your body for fuel, it is put into storage for later use. Glucose storage serves to prevent excessive circulating glucose in the bloodstream – because this can drive inflammation – and also to provide glucose availability at a later time. Glucose is stored as glycogen – long chains of glucose molecules – and is primarily stored in two locations: the muscles and the liver.

Glycogen storage is crucial for performance in longer duration events because it provides a way for the body to access glucose (or fuel) when needed. Without this, the glucose supplementation requirements would be significantly higher. Any additional glucose not stored as glycogen or used for fuel is converted to fat and stored.

How Do You Maximize Glycogen Stores?

Other factors that can aid in glycogen storage include creatine supplementation and coingestion of caffeine with carbohydrates, especially in the post-exercise window.

It’s important to understand that glycogen is stored with water, in a rough ratio of 1g of glycogen to 3-4g of water. That means optimizing glycogen stores (which can be up to ~900g) can cause a significant increase in body weight. Obviously, this is not always feasible for training and may not even be desirable for training, which we explore here. There’s a balance to everything, and carbohydrate intake is no different. The carbohydrate you take in, on the spectrum of carbohydrate loading to no or low carbohydrate intake, is all dependent on goals.

How Do You Use CGM To Measure Glycogen?

The simple answer: You can’t. Measuring glycogen levels is tricky even for researchers in labs.

That said, some athletes using Supersapiens are noticing a correlation between carbohydrate loading protocols and increases in their Average Glucose by 5-10mg/dL. Those athletes also note that increasing their Average Glucose by 5-10mg/dL a few days before an event correlate with higher glucose during the event. In this sense, your glucose levels may act as somewhat of a proxy for your glycogen stores but we suggest using traditional protocols and evaluating what this does for your own physiology.

So, How Does Walking Help?

Understanding that your body has two different metabolic states: during exercise (like walking) and during rest is key. The impact of the exercise, even at low intensities like walking, supports GLUT-4 translocation, which drives more glucose stability by turning steep glucose rushes into sustainable glucose rises.

Additionally, having an appreciation for the role glycogen (glucose storage) plays in athletic performance is critical, since this is how to effectively carbohydrate load before a big day.

So enjoy your post-meal walks for all of their benefits, and especially for the stable energy that glucose stability gives us. 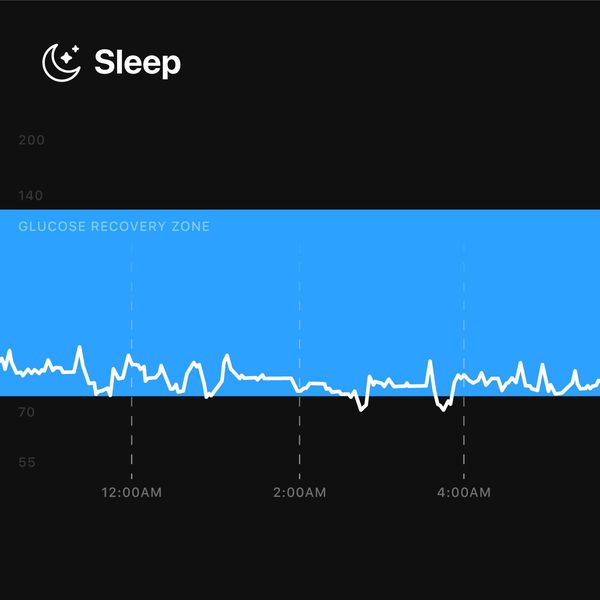