Skye Moench has been on an Ironman hot streak.

And, of course, in a triathlon, this means all four disciplines are dialed in.

Yes, we said four. As in: swim, bike, run… and nutrition.

Skye is intuitive with her fueling and nutrition strategy during her training and racing.

We learned from her that she’s very adamant on what she takes in, when, and what is working for her. She was also clear on where she thought there may be opportunity for further improvements in her fueling strategies.

Skye has been using Supersapiens for a while now. Starting with IRONMAN St. George 70.3 in May 2021. She was less than 10 minutes from the winner, coming in 5th, and running a blistering 1:23 half marathon to finish in 4:14. Given what you can see from her glucose in that race (Figure 1), it is clear she has a great handle on her fueling requirements, and it shows in her performance.

In reviewing Skye’s glucose (above in Figure 1) you can see she has quite a stable level of glucose during her swim. Her fueling strategy to push in fuel early while in the bike segment is also apparent. She rapidly increases her glucose in this portion (which may also be related to intensity changes). This glucose level starts to decline after a period of time during the bike. It is hard to understand exactly why it rises towards the end of the bike leg, but perhaps it was in an anticipatory/stress response to the upcoming transition and run. Once running, this rise starts to decline to a stable level through to the finish.

In approaching another event, IM Tulsa, Skye dialed in her plan further and really nailed things. She increased her carbohydrate intake in training to help fuel her sessions and prepare her for the planned increased intake on race day.

But what does this look like for an elite athlete?

She decided she could push her intake on the bike a bit more with respect to what she previously used at IM St. George. The hope was to see this pay off during the bike and run legs at IM Tulsa. This was in addition to front loading her run nutrition.

Coming through transition in the run, her legs were a bit stiff. (And understandably so!) But once running, she felt great. Her front loaded run fueling as mentioned included; 5 SIS gels (roughly 110g of carbohydrates), half a banana (around 15 g of carbohydrates), 1 pretzel (probably around 2g of carbohydrates) and, of course, it wouldn’t be an Ironman without some sports drink and a Coke, for a total estimated carbohydrate intake of around 603g. (Not including the Coke and sports drink.)

While this is impressive, the most impressive part is that Skye ran a sub 3 hour marathon for the first time. For context, as a stand-alone feat, this would qualify anyone of any gender to run the Boston Marathon. This topped off her 3rd placing in 8:47. Two minutes from the second place finisher and only 7 minutes from the first.

Skye recovered better than normal from this Ironman event. This could be due to a number of things, but she thinks it may be related in part, at least, to her fueling. Even more so given her improved output (increased bike wattage and new run PB).

Interestingly, Skye mentioned that she was probably going to bump up her intake a little more (again!) in training and racing coming up to see how things go. She clearly thinks there is more to gain here.

What lessons can the rest of us learn from an elite performer like Skye?

Skye is constantly iterating and confirming what works best for her to perform better. Her St. George bike leg showed her a bit more fuel meant a few more watts, so she changed things slightly in response.

Flavor fatigue can be real in long events.

The solitary pretzel may look out of place and strange but as Skye mentioned in our chat to her, she would have loved more but couldn’t find them. If you are doing longer events and pushing your fueling, make sure there is the ability for some salty intake in case it is needed too.

Fueling any one session is aiding in recovery for the next. Training is about accumulating fatigue and gaining positive metabolic adaptations but make sure it is the desired amount, not excessive fatigue. 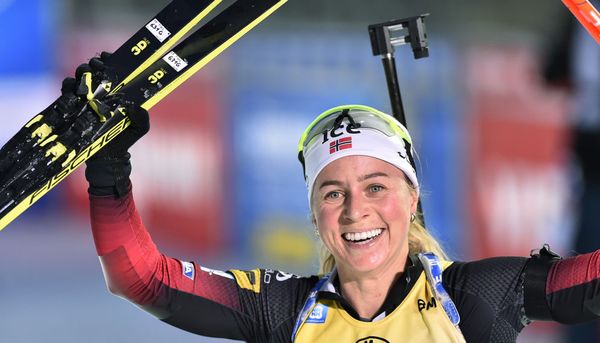 Supersapiens to support a long-term study investigating the influence of the menstrual cycle on performance.