Like most Supersapiens, Sophie Power juggles work and family, and she fits in her training around those commitments.

We recently caught up with Sophie prior to her 24hr track race, where she was hoping to qualify (again) for Spartathlon, one of the world’s most prestigious ultramarathons.

She said, as many can relate, preparation had been good, but she was still rebuilding post-pregnancy and was not as fit as she hoped to be. Success for Sophie on the 4th of March was more about completing the full 24 hours and feeling strong over winning or setting new records.

The reality for Sophie, like many Supersapiens athletes, is that once she finishes her event, recovery is more likely going to look like playing with her sons and feeding her daughter than it will be a recovery shake and massage.

Who is Sophie Power?

For those unfamiliar with Sophie, she is a successful entrepreneur, mother and advocate for women in sport. An image of her breastfeeding her 3 month old baby whilst running the Utratrail du Mont Blanc (a 106 mile mountain race) went viral globally. She has completed over 40 ultra marathons around the world from Bhutan to Cambodia including the including; Marathon des Sables, Ultra Tour Monte Rosa, Comrades and the aforementioned Spartathlon to name a few.

Sophie’s love for running didn’t start as a child, as you may expect, quite the opposite actually.

“I was not a runner at school at all! I remember being second to last in the mile. I was overweight and didn’t really do sports, but I did love to hike. As part of my University Air Squadron I did the Nijmagen Marches – 100 miles over 4 days. A friend I’d marched with did the Marathon de Sables in 2009 and told me I should do it. At the time I was in a very difficult place. I didn’t know where to go with my life and he said it would be good for me. I had 9 months to go from never having run more than a mile to running 250km across the desert! But after doing it, I realized I was actually good at long distance running. I’d had this mental block to running for so many years – I’d labelled myself “not a runner” after that mile at school. It’s something I hear from so many other women who have had similar negative experiences at school. There are so many of us now finding it’s great for mental health and de-stressing, plus it helps us around the kids. And we can always get better, no matter where we start.”

How Do You Fuel and Prepare for a 24h Run?

When talking with Sophie about her preparation, in what can only be described as a conversation as insightful as it was entertaining, Sophie mentioned that she has really struggled with her nutrition, especially as she is still breastfeeding. She feels low glucose levels really quickly and where before she could keep running through a low, or exercise before she ate in the morning, she can't now.

“If I don’t eat every 30mins I drop. Before I may eat a bit extra then wait an hour, but now I know that doesn’t work for me.”

For Sophie, it wasn’t about HOW MUCH she was eating. In fact it wasn’t even WHAT she was eating. But like we hear from a huge number of Supersapiens, for Sophie it was about WHEN she was eating. All other things kept constant, Sophie found that keeping her energy levels and mood up was all about keeping her glucose stable. She started eating smaller meals more frequently and found a huge improvement.

Similarly in consultation with a professional about her menstrual cycle still not returning 15 months after childbirth she found that concentrating her nutrition around her training times was more important than she realized.

“I was eating enough calories overall, but I realized I wasn’t properly fueling my training.  Looking at the data, I’ve realized even having a big breakfast doesn’t make up for not eating enough the night before” “When I fuel better the night before I notice my glucose in training is higher and I feel stronger”

To learn more about the impact of the menstrual cycle on glucose and nutrition planning, check out our article here.

In our chat, we of course discussed her nutrition plan for the 24hr attempt.

The plan was: 150 calories every 30 mins, mostly from Veloforte bars, chews and sports drink and then topped up with real food (which may include some Five Guys if needed, something Sophie was excited could be delivered to the track, a key advantage over trail ultramarathons). “Then when it all goes wrong I’ll hit the gels” says Sophie, “And Haribo if I need a real pick up!”

“I can crash after I have gels but they are the quickest way to increase my glucose levels if they have dropped a lot. When I am low, I use a gels to get myself back up and then will eat some food to stabilize levels. I use them quite strategically.”

How Does Glucose Play A Role In Managing Tough Times In A Race?

In asking about how Sophie copes with the dark moments Sophie said: “I eat something sugary. All my dark moments come when I have low blood sugar.” “During a recent 6hr training race I was feeling bad and getting cranky, my pace was slowing, then I checked my glucose and thought oh, that makes sense, I am low.” Sophie did go on to out herself as a fan of truly bad "cheesy" music to get through these times too. Though she couldn’t bring herself to share any examples with us.

When asking Sophie about her biggest learnings from Supersapiens she said:

“Understanding how quickly I go low has been really helpful, before Supersapiens it was all guesswork. All my fueling in every race up until now has been guesswork. Now I fuel more, and more frequently”

“My general diet has changed. Before I had low glucose most of the day as I was eating most of my calories in the evening -including late night chocolate which spiked my glucose levels and wasn’t great for my sleep.  Now I fuel more around my workouts and have changed what I eat to avoid spikes.  Just adding protein powder to my morning porridge has removed my post breakfast crash.  I still have my evening chocolate of course – I just eat it a bit earlier and slower!”

What Were The Race Results?

Along the way winning overall (men and women), by a large margin (almost a marathon) and gaining an automatic qualification for Spartathlon.

Although this may sound surprising to some, this didn’t surprise us at all. Sophie previously completed the Spartathlon despite a fairly significant injury at mile 138 (of 153) which is no mean feat given notoriously difficult cut off times and finishing rates less than 50%. Similarly, her debut ultra race was the aforementioned Marathon des Sables, so despite “not being an elite” Sophie is clearly a very impressive runner with an exceptional running resume.

How Was Sophie’s Glucose Control?

The first thing that really jumped off the page when examining this data was that Sophie managed to avoid any significant time below 80 mg/dL, which is a great indication that her fueling plan before and during the race was working well. This was coupled with her 74% of time spent in her Glucose Performance Zone (or GPZ for short), her optimal range of glucose levels for running.

Even with the challenge of a 24hr race, which brings circadian challenges as well, she managed to maintain energy and fuel strong throughout.

Due to the nature of this 24hr race which was around a closed track, glucose drops are inevitable with taking time to stop and eat, toilet breaks, and any number of similar things. That said, despite all this, Sophie maintained relatively stable glucose, with a Glucose Stability of 22 during the event.

Glucose Stability is a metric in the app that helps Supersapiens track their consistency of glucose supply.

Given that that Glucose Score was designed for higher intensity activities, of duration 75 min+ but probably not quite this long, of a constant nature this score is quite good. Given the longer duration of this event there are natural changes in pace and breaks that can cause things like drops, similarly the intensity of this effort is by no means high given the duration of exertion required. Of most concern to someone like Sophie should be the slope which was almost flat and the lows (time below 80 mg/dL) which was also effectively zero.

These two factors give the best feedback in a situation like this and thus Sophie clearly had her fueling plan dialed in. (Or at least her husband did who was handing her food every 30 minutes for that 24 hours!)

Note: the glucose data appears as is due to the nature of a 24 hour race and Sophie not carrying her phone to collect minute-by-minute data points. There are a few periods of normalized data and some missing data.

Looking to be able to analyze your glucose data as we have for Sophie above? Check out the Supersapiens Dashboard and our Dashboard Guide.

What did we learn from Sophie?

Overall, the outing was clearly a huge success for Sophie. We are incredibly grateful to train with Sophie and support her through this enormous effort. We thoroughly look forward to her assault on Spartathlon. 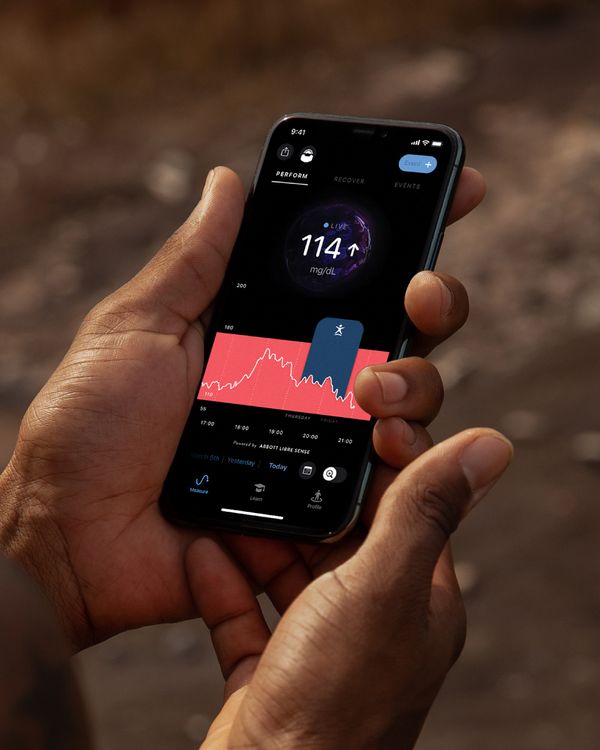 Here's what you can do to make sure you stay in your glucose performance zone.

Here's how to use the Supersapiens Dashboard, the best tool for analyzing glucose data and optimizing metabolic efficiency.