Let’s start with the obvious and borrow the words of Dr. Stacy Sims:

“Women are not small men.”

This statement can cover a lot of areas: Societal expectations. Gender stereotypes that have often affected women's relationships to sport. Physiological adaptations to exercise. And then, of course, there is basic biology.

Indeed, women have periods! And men, well, don’t. So for those (men) who are unfamiliar, the menstrual cycle is a biological rhythm occurring in women from puberty to menopause, where sex hormones such as estrogen and progesterone are produced by the ovaries and fluctuate in a cycle with an average 28 days.

Most women are at least somewhat familiar with this periodic biological cycle. And while it can seem obvious, many don’t realize the fluctuations in metabolism, mood, sleep, sexual function, even growth and development, are associated with the endocrine system. Given that glucose regulation is mainly controlled by the endocrine system, it is not surprising that the menstrual cycle can also have an effect on athletic performance, including glucose metabolism during exercise.

Before we explore the mechanisms behind this phenomenon, let’s have a closer look at the broader topic of the period:

Note: There’s significant variability between individual menstrual cycles as to what is deemed ‘normal’, as there is a large spectrum of responses. This also holds true for the effects of the menstrual cycle on metabolic control and exercise performance.

So glucose regulation is mainly controlled by the endocrine system, and that heavily impacts the menstrual cycle. On top of that, lifestyle, training, stress, diet can affect the functionality and sensitivity of the endocrine and reproductive systems. So it’s not a surprise that between-subject metabolic responses, including glucose dynamics and glucose adjustments during exercise, might vary considerably between men and women.

More importantly, within the female body, such responses may also vary across the menstrual cycle which plays an additional confounding role in interpreting glucose responses.

Despite such an established potential scenario, the current level of available knowledge and the inter-individual differences make the relationship between menstrual cycle phases and exercise performance highly variable (Figure 1).

Could glucose levels and therefore glucose metabolism, respond to different menstrual phases? Acting as a proxy for better highlighting and understanding female physiology?

Indeed, different hormones released across the menstrual cycle appear to impact glucose responses to food, stress, and the reliance on glucose and fats for energy production both at rest and during exercise.

Although the predominant role of sex hormone fluctuations across menstrual cycle is to facilitate reproduction, studies indicate that estrogen and progesterone may alter substrate utilization (glucose or fats), which could affect endurance performance in women.

Three are three main variables sensitive to the menstrual cycle and to exercise performance:

Let’s go in depth on each.

It has been suggested that estrogen results in greater reliance on fat for energy production during exercise. Indeed, many studies revealed that, for the same exercise intensity, women rely more on fat than men for energy especially when estrogen levels are high3.

On the other hand, available evidence also suggests that during the luteal phase, women are likely to experience improved endurance performance, since high estrogen during this phase would accelerate fatty acid oxidation and therefore potentially ‘spare’ muscle glycogen.

However, while there is agreement that there is increased reliance on fat during the luteal phase when compared to the follicular phase, the performance benefits of this substrate shift (increased fat oxidation and sparing muscle glycogen) are unconfirmed and still trivial to interpret with clarity.

The science in this area is somewhat conflicting in that there are studies showing improved endurance performance and others with no difference between menstrual phases. This inconsistency may be explained by the second major hormone of the menstrual cycle, progesterone. And progesterone levels, as previously mentioned, increase in the mid-luteal phase along with estrogen levels. Progesterone though is known to act antagonistically to estrogen, counteracting many of estrogens metabolic effects, including substrate utilization during exercise. Consequently, researchers concluded that endurance performance may be improved during the mid-luteal phase compared with the early follicular phase, when estrogen-to-progesterone ratio (estrogen concentration relative to progesterone concentration) is sufficiently elevated, and the magnitude of the increase in estrogen from the early follicular phase to the mid-luteal phase or overall luteal phase is at least in the order of 2-fold more.

Estrogen facilitates fat oxidation during exercise, which may result in muscle glycogen ’sparing’ and thus contribute to higher endurance performance. Although evidence is trivial, the above suggests that females may be able to further ‘push’ in regards to endurance exercise during the luteal phase of the menstrual cycle.

In addition to this, estrogen may also enhance insulin sensitivity, which could impact glucose metabolism especially after meals and during recovery fueling. Such impact generally manifests as better glycemic control, decreased insulin production and enhanced sensitivity. This may be part of the explanation for why pre-menopausal women are generally ‘protected’ when it comes to diabetes and metabolic syndrome compared to matched-age men, while there is no difference among sexes following menopause.

On the other hand, low estrogen has been associated with insulin deficiency in women and this might expose to chronically higher circulating glucose levels.4 Also, progesterone does act antagonistically to estrogen, with higher progesterone concentration typically leading to reduced insulin sensitivity, worse glucose control and a higher risk of developing insulin resistance. Taken together, the above hormonal fluctuations of estrogen and progesterone across the menstrual cycle may influence endurance performance through the above mentioned mechanisms.

High estrogen levels (as in the ovulatory phase) enhances insulin sensitivity and action while lower estrogen levels and higher progesterone levels (as in the follicular and mid-luteal phases) favours insulin resistance. Both actions may result in very different glucose responses to the same meal or carbohydrate source. Lower in the ovulatory phase and higher in the follicular and mid-luteal phases. Potentially, this suggests how to strategically periodize carbohydrate intake (both quantity and type) to validate effects with CGM live visibility. This can allow a female athlete to optimize her food regimen to better manage insulin action and prevent side effects of high circulating glucose and insulin levels.

Nutritional status before and during exercise may somewhat counteract the hormonal effect and the substrate shifts seen in women in contrast to men during the menstrual cycle. A study showed that when women and men eat with a mixed diet (mixed macronutrients; carbohydrates, fats and proteins) for 2 days before exercise, the contribution of carbohydrate to total energy expenditure was higher in men than in women, whereas when a high-carbohydrate diet was used for 2 days before performing exercise and glucose was ingested before and during exercise, the carbohydrate oxidation rate during exercise increased in both groups with differences between men and women no longer apparent.5

The higher carbohydrate intake might override the effect of hormonal fluctuations during the menstrual cycle in female athletes. Therefore, when seeking high-intensity peak performance, a good strategy could be to slightly increase circulating glucose levels by means of intaking more carbohydrates while enhancing glucose oxidation. An interesting study found that in order to achieve this higher intake, women would need to increase their total energy intake by 34% during a carbohydrate loading period 6. In addition, by increasing energy intake, females were able to achieve similar concentrations of glycogen as males. Therefore, to carbohydrate load and achieve benefits comparable to those of a male, the female must consume extra calories rather than simply increasing the percentage of dietary carbohydrate load. However, such a periodization model needs to be always considered within a proper, goal-oriented and planned food regimen.

On the contrary, when the aim is to improve fat oxidation, lowering circulating glucose levels, avoiding spikes, and reducing carbohydrates intake can potentially enhance and favor the already present effect of hormones on performance.

Although there is currently limited evidence in that regard, we need to highlight the importance of nutritional intervention when it comes to substrate utilization in exercise performance in women. Despite the theoretical benefits of estrogen, the effect of menstrual cycle phase on endurance performance and substrate utilization remains unclear and inconclusive given the limited evidence currently available.

Now with advanced technology of continuous glucose monitoring (CGM) available, there is the potential opportunity to better understand the individual relationship between the menstrual cycle and CGM dynamics. Such portable technology allows studies to go outside of the laboratory environment and follow athletes 24 hours a day. Individuals can create their own library of physiological glucose responses at different phases of their cycle, taking into account the variability and subjectivity of such a unique body’s response.

In this regard, Supersapiens is now supporting The Arctic University of Norway & Norwegian University of Science and Technology to conduct a high-quality research study in a group of elite female athletes to provide valuable information in regards to menstrual effect on glucose dynamics in endurance performance at different phases of the training cycle and among a competitive XC-Skiing season.

The study will begin in August 2021, and the aimed date for objective data is a year later. Simultaneously, the Supersapiens Science Team is in the process of conducting a large observational study of 2000 subjects with the aim of characterizing the relationship between glucose levels and the menstrual cycle phases in an unsupervised but real-field setting. This will will help identify not only glucose pattern across ‘normal’ menstrual cycle in eumenorrheic women, but perhaps extend knowledge of how this alters in athletes suffering from relative energy deficiency in sport (aka RED-S, formerly known as the “female athlete triad”), which characteristically has low estrogen levels.7,8 Given the relatively high prevalence of female athletes experiencing menstrual cycle abnormalities, and the potential benefits of estrogen in endurance performance, we believe it’s time to reveal this issue in the athletic society, with the ultimate goal to support female athletes in real-world situations. Stay tuned!

WHAT YOU CAN TEST AT HOME

Try to move endurance based activities to the mid-luteal phase. Notice how glucose responds differently in this phase during endurance-based activities. How much fuel do you require to maintain glucose levels with respect to other phases of the menstrual cycle? You can use the tags, notes, and ratings of exertion when making events exercise in the Supersapiens app to help track how these changes impact performance and feeling. Always consider the importance of following a proper nutritional plan before adjusting your diet. Before making any change, discuss it with your nutritionist.

Talk with your nutritionist/coach and see if you can try to slightly increase the intake of carbohydrates when your insulin sensitivity is at its peak as your body has more "buffering" capacity. Notice how differently your glucose responds after a certain meal when in this phase. In addition, given the requirement to slightly increase the total carbohydrates intake during the cycle, take notes about the total intake and the relationship with your average glucose levels. You can use the tags, notes and macronutrient values when making food events in the Supersapiens app to help track how these changes impact performance and feeling. 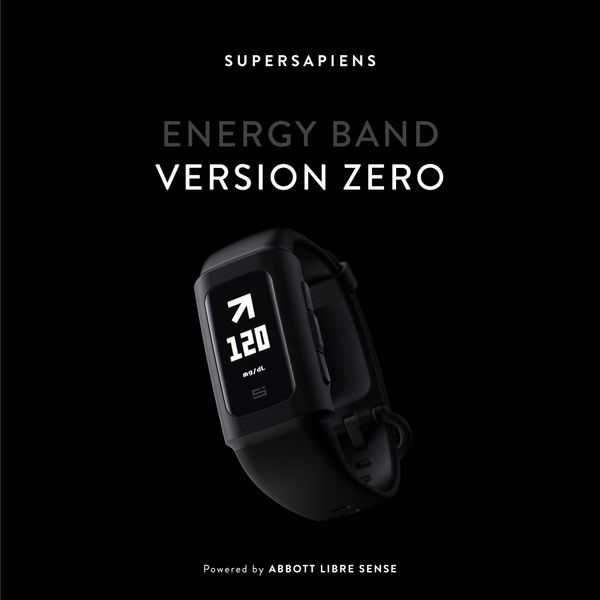 Check out the world’s first performance wearable that displays real-time glucose data without needing a phone nearby. 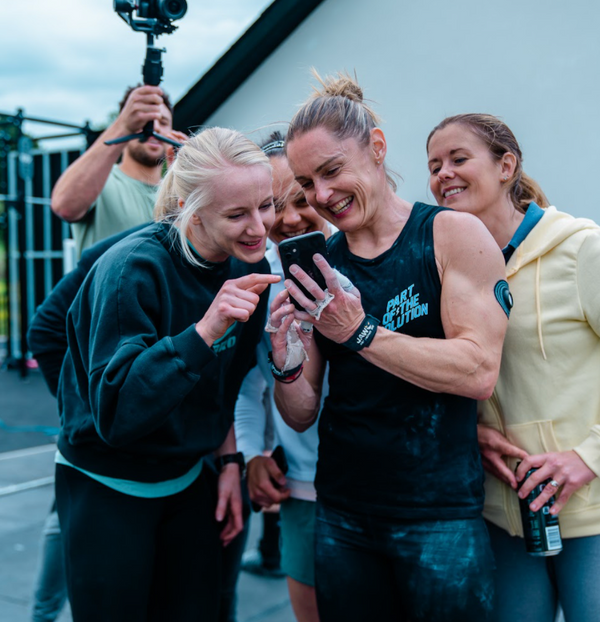