Everesting, for the unfamiliar, is a feat of climbing the height of Mt. Everest. In this case, it was riding a bike and within a single attempt. That is 8,848m (29,029 feet) of elevation gain. Overcoming such a challenge requires physical ability, specific training, mental strength, careful planning, and a focused mentality. There have been 16,801 successful Everesting attempts in 107 different countries. Athletes can create their own way to make it through: Pick any hill, anywhere in the world, and complete repeats of it in a single activity until you climb 8,848m.

None have come close to what Ronan has achieved.

His new record was completed on the same ascent as his first record ride: the climb to Mamore Gap in the Northern reaches of Ireland. Ronan performed this unbelievable feat on an 810m segment of straight road with an average gradient of 14.2%, climbing 117m per ascent. To save you from doing the math on this, that’s just over 76 laps. But of course, Ronan did 78 for good measure. He covered 126km for his 8,848m of elevation gain.

An average power of 296 watts (6 watts higher than his previous attempt) is perhaps even underestimated due to riding a few laps on a different bike without a power meter.

You read that right: Over six and a half hours of riding, with more than three and half hours within 20 beats of his threshold heart rate.

And over 70% of his time on the bike was spent between tempo intensity and VO2max. This is effectively an interval workout of five to five and a half minutes while climbing, and using the ride down as recovery.

Maintaining such high relative intensity for that long requires an insanely high rate of energy turnover, coming from glucose oxidation. Ensuring a proper glucose supply to the working muscle is crucial for this caliber of effort. At this intensity, the body can burn up to 5g of carbohydrates per minute. Consequently, the body requires significant endogenous (glycogen stores) and exogenous (fuel intake) glucose that, if not carefully approached, might also create GI stress and discomfort. Careful planning and data experimentation was a key element in achieving such performance.

How do you fuel such an effort?

By the look of Ronan’s data below, very well!

Ronan fueled consistently throughout the ride, made logistically easier given the ability to consume fuel on the downhills, every five to five and half minutes. He has admitted to having a strong stomach, but in a challenge to current upper limits of what is believed to be possible, his intake was in the vicinity of 145g/hr of carbohydrates (guidelines suggest that 90g/hr is the recommendation for activities beyond 2.5 hours but some more recent research has emerged of intakes up to 120g/hr, showing some benefits to recovery and fatigue). His choice source was predominantly fluid based, making his absorption a little easier, but also aided in his hydration.

There is a difference between the amount of carbohydrates ingested and how much of it will be oxidized (a chemical energy-liberating reaction) in the muscle cell to produce energy. Maximizing the ability to oxidize what we ingest is one of the key aspects to enhance performance. The ability to sustain such a constant glucose level as we see in Ronan’s live data could potentially indicate a balance between what he was ingesting (supply) and what was used for energy purposes (oxidation).

But there’s no simple means to individually understand and measure what has been defined as the oxidation efficiency (the ratio between exogenous carbohydrates ingested versus oxidized).

This is how he consumed over 2g/kg/hr of carbohydrates:

Looking at the trace from the Everesting attempt (Figure 1 and 2), there are some really interesting insights:

From Figure 3, it’s also clear how Ronan wisely started feeding with carbohydrate before the start of the Everesting to maximize the glucose oxidation efficiency when needed.

Glucose oxidation (“biological burning”) is the process to obtain the energy needed to sustain work capacity from carbohydrates. The typical time-pattern of exogenous (ingested) glucose oxidation rates is not immediate and needs time. Five minutes following ingestion, it is possible to see the appearance of ingested glucose traces in the blood. However, during the first 75-90 minutes from ingestion, carbohydrates oxidation will continue to rise after a plateau is reached.

An unsurprising crash follows this, most likely resulting from the mixture of glycogen depletion (Yes, even with his fueling, research suggests it would still have depleted his muscle glycogen stores significantly and an insulin rush to combat the large spike in absence of physical activity.)

The key learning from this event is that Ronan made a very conscious decision to fuel at this rate, and prepared a data-backed plan to execute on it.

The biggest part of this plan? Train for it.

Ronan actively fueled at this rate in an attempt to ensure that his body could tolerate it.

In addition, what Ronan showed in terms of glucose levels and glucose control was something that was not possible to observe without continuous glucose visibility. Such a unique data pattern challenges the status quo and the understanding behind the role of glucose in promoting high-intensity performances.

This gets us to some interesting scientific questions. Are high level endurance athletes capable of consistently sustaining high circulating glucose levels? Does this pattern highlight a unique characteristic/specificity? Might the concept of the “athletic glucotype” exist?

The only thing that would have made Ronan’s performance even easier on that day? Aside from not getting a huge flat tire? If he had real-time glucose data on his bike head unit so he could make real-time data-driven fueling decisions to stay in his Glucose Performance Zone.

Thankfully, on his next attempt, he will.

And you can too. Come check out all of Supersapiens integrations at supersapiens.com. 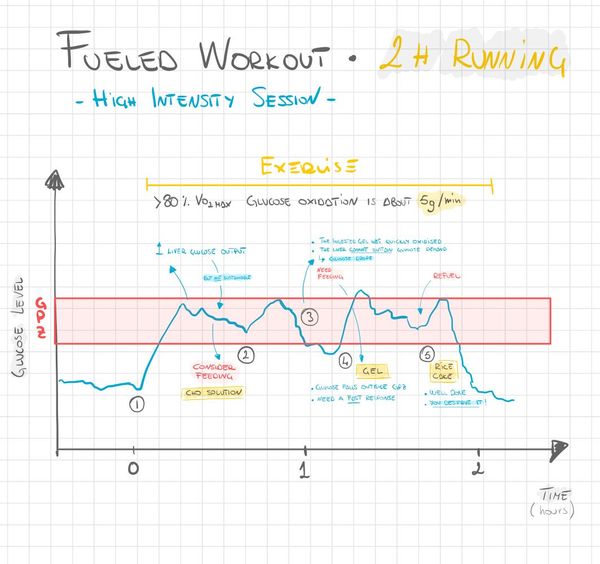 Interpreting your glucose data during fueled training. Under fueling is setting yourself up to underperform, while feeling terrible in doing so, and potentially impairing key adaptations and fatigue tolerance. Elite endurance athletes never compete in a fasted state. So why would you train fasted?